When RV holding tank sensors incorrectly read full, it is typically due to residue build-up connecting the sensors. This can be cleaned off with standard anti-grease detergent and or a chemical or enzyme based holding tank digestant treatment.

Tank sensors take a lot of the blame when a monitor panel consistently reads incorrectly, but they are rarely the culprits. You know you dumped it before you left the last campground, but your monitor panel reads full. Great! The holding tank sensors aren’t working. Don’t worry, the sensors are not like your brother in law who is happy to lie on the couch watching game shows and eating nachos when he is supposed to be job hunting. No, in fact your sensors are probably working and they are working overtime, it is the accuracy of their efforts that are in question.

A traditional tank sensor completes the circuit in a simple low voltage electrical system. They are mounted through the sidewall of a holding tank so that each sensor’s head is on the inside of the tank and the sensors physically ascend or descend in a line on the body of the holding tank.

Most tanks provide a reading at four points; empty, one-third full, two-thirds full, and the dreaded full. To accomplish this the um…material held in the tank will “ground” each sensor as the tank fills past them. In the example above an accurate reading would be 1/3 full, as the tank contents have not risen past the level of the 2/3 sensor quite yet. Basically as the tank fills, the contents electrically ground the sensors allowing their indicator lights to display on the monitor panel. (Quick electrical review – at minimum any electrical system needs a hot and a ground to work. Take one away and we “loose” power. The monitor panel provides the hot when you depress any of the test buttons and, if they are grounded, the corresponding indictor lights illuminate, if not grounded no lights.).

That is a basics of the correct operation of a holding tank sensor, so what about sensors that read incorrectly. Again, blaming the sensor doesn’t usually do much good. It just hurts the sensors feelings and makes for an awkward apology when the real culprit is discovered. Most inaccurate readings are going to indicate that the tank is more full than it is in reality, and that is because of the nature of electricity, not the sensors. As we explained the sensors simply complete the circuit in this system and if the system is reading 2/3 full when it is empty it is a good bet the sensor is providing a ground. How is this possible, if there is nothing in the tank? Well, just because you dumped and flushed your tank doesn’t mean there is nothing in it. Yes, all the free flowing contents drained but that doesn’t mean you don’t have some stow away materials. Anything that connects the sensor heads to one another on the inside of the tank, like non RV approved toilet paper, will cause incorrect readings. And if some waste manages to impale itself on one or more of the sensors this will also cause inaccuracy. The sensors are still working and doing their job correctly, they are just unknowingly passing bad information. A new type of sensor that adheres to the outside of the tank was designed to combat this exact issue. Using a system that does not penetrate the tank sidewall prevents any type of build up on or between the heads of the sensors, normally found inside the tank wall. 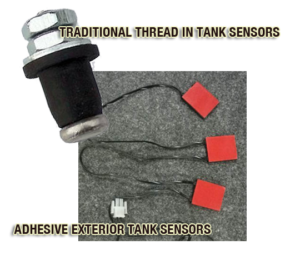 The issue is the new sensors work on density and can also be fooled by waste build up on the tank walls, again giving false information. In the rare instances where the tank says empty and it is full we may find the sensor to blame, but usually it is an issue with the electrical system and not the sensor. These issues can be more difficult to diagnose and may require a service professional.

The old ounce of prevention is worth a pound of cure cliché rings very true here. The best way to keep your tanks sensors working correctly is to take proper care of the tank itself. The waste tanks are more prone to sensor issues, simply because of the nature of the materials contained, than fresh water tanks so we will focus on those. The grey tank holds sink and shower water and the black tank holds the toilet waste. Both tanks contain enough biological material to connect the sensors, creating the inaccurate readings described earlier. There are many chemicals in the RV industry specifically designed for the treatment of these holding tanks that fall into two categories; deodorant and digestant. A deodorant is only going to cover the tank odors while the digestants will actually breakdown the tank waste.

We have found the Happy Campers brand tank treatment to be the most effective chemical for tank care. It has a powerful blend of digestant minerals that break down any biological materials and by breaking down said materials quickly it also prevents odors without the need for obnoxious perfume to cover them. Luckily, we carry Happy Campers in Junction City, Oregon and it’s quite affordable. The other issue that can arise is using the wrong type of toilet paper. RV toilet paper is designed to break down into small pieces for easier digestion by the tank chemical, leaving less to be flushed away but household toilet paper can cause major issues. RV tissue is built like pressboard with lots of little pieces squished together to make each sheet. Household toilet paper is built like plywood, lots of layers squished together.

When household tissue breaks down it often forms longer strand type pieces that can begin to coat low points and corners of the holding tanks, eventually reducing the tanks capacity. These strands are also more likely to connect the sensors on the inside of the tank than the residue from the RV style toilet paper. If you have a favorite home brand, or your partner likes the comfort of the household stuff, test the way it breaks down by putting a single sheet into a jar of water with no RV chemicals and give it about half an hour. Shake the jar (with the lid on) and if the paper basically dissolves you should be ok. RV toilet tissue does come in “facial quality” two ply and is always the safest bet. 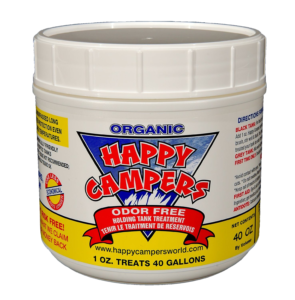 I Waited Until I Have a Problem, Now What?

You know your monitor panel is wrong but you still are a little leery of letting guests use the lavatory. It always says full but you have learned to live with it because it has got to be something major and you just don’t want to deal with it. It’s too late to go back and do it right, so might as well just dump the RV every other day.

It may be too late to go back, but it is not too late to do it right. At Bish’s RV Service we have two main weapons to battle the paper mache effect and any residual biological matter left in or on the tank, Happy Campers and Dawn. Yes, Dawn® dishwashing liquid can help both the black and grey tanks performance. Much of what is left after the tanks are dumped is in essence grease, and if you have ever watched TV I am sure you know that Dawn takes grease out of your way. The Dawn is used first and allowed to sit for a long while. (The longer any treatment is allowed to work the better it will perform.) Then if need be, after the tank is flushed, Happy Campers and water are added and again allowed to sit. For stubborn tanks these steps can be repeated and on occasion we will half-fill a tank with the Happy Campers and water solution and then add a bag of ice. We will then move the vehicle to use the ice as a sort of rock tumbler that does an excellent job breaking stubborn debris free from tank walls and sensors. Don’t worry about internal tank damage, the ice won’t ever have enough force to do more than dislodge materials that have hardened to the tank walls or probes.

I Did All That and It Still Reads Full!

A final possibility is that there is significant build up in the tank that will take more aggressive treatment to remove. It is not uncommon for RVers, experienced and not so experienced, to leave their valves open when they hook up at the park. The thinking is it will be like at home where we don’t have to worry about filling the tanks, they will just drain into the sites dump station. This is only partially true and unfortunately the partially untrue part gets left behind. An RV’s holding tanks are designed to use gravity to help evacuate them, which means the tanks need to be somewhat full before dumping or gravity will actually work against us. If a tank is left open or not filled to the required level the liquid runs away easily, but the solids stay. Over time this can create serious tank problems including complete blockage. There are products you can try before you take your RV in to be serviced, that are designed to breakdown the blockage but are not designed as everyday chemicals. We have found the Tank Techs RX brand to be one of the most effective chemicals available for severe tank treatment. If none of the DIY processes fix your issue it is probably time to consult an industry professional. There could be an issue with the electrical system, which can be in the probe wiring harness, the monitor panel, or in the RV’s house electrical system and tough to troubleshoot without the proper tools and experience. Oh, and most holding tank repair, including replacement of course, requires the tank to be dropped and no matter how diligently you flushed and drained the system there is always a little evidence left behind. Yuck!

All Well that Ends Well

Now your tank sensors are spot on accurate and you have no fear of an embarrassing overflow. You know that the best way to prevent future problems is proper care today, and you know the best tank treatments and care practices. Your RV sanitation is in good shape and ready to take on adventure. Now if you could only get your brother in law off the couch!